A departure from my usual posts but an experience I want to share.

My blog has long focused on libraries, library automation and education issues.   However, I just had the extreme good fortune to be invited to be part of a team that is going to plan a new university in China and the primary backer of this plan asked the team to attend a "work-acation" where we would build the personal relationships and do some of the planning necessary to build that university.  So a trip was planned for us to go to Tibet.

As some of you may know, going to Tibet is not easy.  It requires a lot of paperwork, a group of a certain size and massive coordination with numerous people and entities - so it's beyond the reach of many people.   Yet, it is a beautiful and stunning land not only for it's geography but for it's people and history.  So I want to share my experience with you.  Fortunately it was such a remarkable experience and so much was happening so fast that I decided to keep a journal, something I've never done before on a trip.  I've shared it with a lot of my friends and they've encouraged me to share it with a wider audience.  So, you are my designated victims.  I've tried to weave in a little of the history, culture, geography and food as well as a bit of humor so it'll be an enjoyable read.

I'll roll this out over the next seven days which closely matches the length of our stay.   Consider it a reading vacation from the usual posts before we all come back together at the end of the summer and get underway again.  I hope you enjoy this and that it will encourage you, should you ever be given the opportunity to go to Tibet, to seize that opportunity.  It is a remarkable place.

Day One - Take a deep breath.

After climbing off the airplane in Tibet, it takes only moments to realize you're in a truly different place.  This is because the act of climbing off the plane will have your brain firing urgent messages to your lungs to start working harder -- much, much harder.   Of course you've known this would be the case from the tourist guide you picked up to read when you found out you were coming here.  Still, you feel your body responding sluggishly and you realize the slightest physical effort leaves you panting. Our hosts advise us to walk slowly and be sure not to over exert ourselves.  So, guess I won't be picking up that 63 lb suitcase I brought.  You can ignore this of course, but you would be doing so at your own peril. Altitude sickness can result in death, so I mean real peril.  So while gasping and waiting for your luggage that has to travel all of about 150 ft. from the airplane outside to the conveyer belt inside, you turn and admire the scenery. 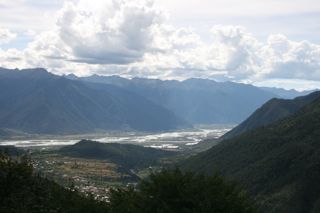 There are mountains as far as the eye can see.  Really big mountains.  There is a reason they call this country the “rooftop of the world”.  It's only an appetizer of course; a delightful taste of what’s to come, but it also underscores the immensity of this place.  We’re going to spend eight days here. Some days we’ll be more than ten hours in the van, and yet, at the end of the trip, when we look at the map of what we’ve covered, it’s only a small portion of this county.  The mountains are surrounded by skies that are an incredibly brilliant blue.  Sunshine is the order of the day (Tibet is considered one of the brightest places on Earth on the planet and the reason solar energy is so popular here).  After retrieving our bags we meet the greeting committee, who gives us an official welcome by tying white, silk scarves around our necks and shaking our hands.  Yes, this is a different place.   We load into a van (slowly) and head off to a restaurant for lunch.

Within the first few moments of being in a vehicle in Tibet you realize that driving here involves keeping one hand on the steering wheel, one hand on the horn button and excellent spatial perception.  The horn is an essential tool of driving as people pass on twisty mountain curves, in the middle of towns and really any place, and I do mean ANY PLACE, two vehicles can clear each other (which is where the spatial perception becomes critically important, down to inches – really a very few inches).  It isn't that they're trying to tell people to get out of the way, it's just a method of letting people and trucks and cars, etc. know that you're nearby and possibly going to pass them. Think of it as a loud and near constant proximity indicator.

Meals in China are simply beyond description..

We don't go far from the airport for our first meal.  It's really an introduction of the trend to come, with an immense number of plates of food arriving in a steady stream.  They tell us they order a plate per person but the plates are large and the food is shared, so it is a LOT of food. 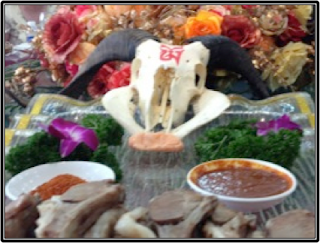 Being a light eater at lunchtime, this is a bit disconcerting. I don't want to offend our hosts so early, but there is no way I can consume even a sample of each dish arriving.  Nor do I want to see it wasted.  (I’m still haunted by stories about the starving children in China when I refused some of my Mother's cooking as a youngster).  I also know that all too many of the dishes being served started out as creatures I personally have vowed to never eat or that are prepared by someone taking a large cleaver to their corpses.  Don't like bones?  Spit them out and get use to it.

What is much harder to adjust to is the extent of the animal that is used in food preparation.  Let's just say that there isn't much wasted, not much at all. Before our trip is over, we'll be offered turtle (shell included), a whole baby pig, ram (with the skull on a plate as a decoration), all kinds of seafood including shark fin soup and an item I found totally repulsive - a sea cucumber.  Sea cucumbers remind me of my sister’s hair curlers when we were young, those with the plastic pins sticking out all the way around it.  That's what a sea cucumber looks like and its floating around in your soup bowl. Quite frankly every time one of those appeared in front of me, my stomach spun like an out-of-control merry-go-round. I guess if I was once a starving child I might think differently about this, but I was fortunate not to be in that situation.  I also learn very early on that meals are accompanied by lots of toasts, involving lots of wine.  They toast us; each other and we toast them for the entire meal. For a person who seldom drinks, I’m wondering how I’m going to survive this for the next two weeks?  I'll have to find a way.

During this trip, we’re going to spend a lot of time on a road that goes a total of 5,600 km (3,500 mi) from Beijing to the border of Tibet and Nepal.  This brings about the next realization of traveling in Tibet, which is that you don’t go very far without having to stop at a checkpoint and produce paperwork that says it is OK for you to cross into the next village/area/town.   If you don’t have the paperwork, you’re not going forward.  These checkpoints seem to serve several purposes: a) controlling the movement of people, b) employing young Chinese people (most checkpoints have a minimum of 4 and sometimes as many as 8-10 youth stationed there.  Usually, only 1 or 2 is needed to run the checkpoint), c) to monitor your time and speed in using the road.  Now, obviously you can take breaks to kill time, but what you CAN’T do is speed straight from one end to the other.  At least, not if you want to avoid being in a long and losing discussion with some Chinese police officers.   It isn’t uncommon at checkpoints to have these checkpoint people giving you very surly looks.  But we have an attractive young lady who is the tour director riding with us much of the time and she disembarks and deals with them.   So far she has always been successful in securing us passage.  As Bob notes, some things, like attraction between genders, are universal. The checkpoints continue throughout the trip and are very, very frequent.   For me, it underscores one of the real freedoms we have in our country, that of being able to freely move about without clearing it with officials.

Bathrooms are the pits.  Literally.  So are some of the roads.

We take restroom stops frequently.   In part, this is because our tour company is great about making sure we have plenty of water to drink.  At these altitudes, dehydration comes about quickly if you aren’t diligent about consuming lots of water.   However, we’re drinking enough that we still need a restroom occasionally.   Restrooms here are, shall we say - an experience.  Sometimes designed for one person at a time, sometimes for two, but when they tell you it is a “two-holer”, it’s important to understand what that means.   It literally means you’re talking about a hole (or two) in the ground.   Sometimes, if you’re really lucky, there might even be tile around the hole, not clean tile mind you, just tile.  That way you won’t have to stand or squat in the dirt.  As for tissue, well, bring your own.  Is there a sink to wash your hands in afterwards?  What do you think?  Thank goodness my wife stuffed my bag with toilet paper, sealed wipes and anti-bacterial fluids.  Others also brought supplies.  We share the wealth.  We’re all in this together.

Another reason for frequent rest stops is that our internal organs are taking a beating.  Roads, while paved, become remarkably rougher with the continuing rise in altitude.  It’s a very good thing we humans have two kidneys.  At the rate we’re going, I suspect all of our kidneys will be Jello by end of the day.  Sometimes the driver warns us when we’re about to hit a pothole.  Sometimes, he seems as surprised about a new hole as our kidneys are, implying it wasn’t there the last time he went this way.

Next, some of the beautiful lakes, highway adventures and the city of Llhasa.
If you want to see more pictures from the trip, you'll find them on my FLICKR site.

I'm a retired dean and chief technology officer of a research library, managing director of a research institute/museum and past president of several technology firms that developed software for academic libraries.